4 Investigative Journalism Podcasts That Will Keep You Riveted

We love journalists here at Cision, not only for the content they write but as the backbone of a free press. Investigative journalists, who research deeply and scratch beyond the epidermis of the story, are integral to the collective understanding of the world in which we all reside. Investigative journalists are credited with exposing the Watergate scandal, disability pension fraud in Boston (brought to you by the same team that inspired the movie “Spotlight”), and Theranos’ house of cards.

Podcasts reported by investigative journalists similarly delve into the maelstrom of an untold story and pull on the thread of truth until they weave together a coherent narrative, often with clips of the people involved. It’s like being read a story, a gripping, hard-to-stop-listening-to kind of story that involves real people and, usually, real scandals – and you can consume it while you’re doing your laundry.

Laura Beil, a freelance health and science journalist who has written for the Dallas Morning News and Science News, investigates a woman who spent much of her adult life convincing people she was sick with cancer, muscular dystrophy, and beset by many tragedies – despite none of it being true. This six-episode docuseries from iHeartRadio and Neon Hum Media explores the story of Sarah Delashmit, a former nurse, and her deceit through the lens of those she manipulated.

Beil seamlessly blends the facts of the story with the emotional testimony of those left in Delashmit’s wake to create a riveting account of someone who deals in the currency of sympathy.

If you like this, you also might like: “Wild Boys,” from Campside Media, reported and hosted by Sam Mullins. Two boys emerge from the British Columbian wilderness claiming to have never met people in the outside world. They take advantage of the kindness offered to them by those in a small Canadian town.

In this five-part series from Serial Productions and The New York Times, Chana Joffe-Walt reports on integration efforts in the New York City school system and the unintended consequences of how integration might occur. Centering on one Brooklyn school as a microcosm of district-wide challenges, Joffe-Walt addresses what it really means to integrate, who is affected by educational inequalities, and how white parents are juggernauts of influence that may be widening the gap instead of narrowing it – even if unintentionally.

Exploring the effects of race on the largest school system in the country is a weighty topic and Joffe-Walt spent years attending meetings and gathering information to ensure a detailed, longitudinal look at a problem many know about but few discuss.

If you like this, you also might like: “Stolen: Surviving St. Michael’s,” from Gimlet Media, hosted and reported by Connie Walker, a Cree journalist from Saskatchewan working for CBC News. This podcast uncovers the horrifying details of how Indigenous children were treated at a residential school in Saskatchewan – including members of Walker’s own family.

This multi-year-long docuseries by Josh Baker, an award-winning documentary filmmaker who has worked for BBC, unravels how a woman from Indiana ended up living in Raqqa, Syria, an ISIS caliphate, married to an ISIS sniper and mother to a son whose ISIS propaganda video threatened the life of a sitting U.S. president – and what happened after that video aired globally.

In this podcast by PBS Frontline and BBC Sounds, Baker sets out to detangle the web of information – the truth, the lies, and everything in between – on Sam Sally (Sam Elhassani) and the motivations, decisions, and actions that brought her and multiple children across the globe and into the lap of a terrorist organization.

If you like this, you also might like: “Dr. Death,” by Wondery+, hosted and reported by Laura Beil. What happens when no one is willing to report a doctor who is so terrible at his job that he kills people? It’s the intersection of willful negligence and tragedy.

You know this story. How could you not? The rise and fall of Theranos and its founder, Elizabeth Holmes, is a rubbernecking dream that is somehow not an accident. It started with John Carreyrou, an investigative reporter at The Wall Street Journal. His eye-opening article revealed Holmes and Sunny Balwani (Holmes’ former COO and partner) had misled investors for years on Theranos’ capabilities, which turned into many articles and eventually a book, “Bad Blood” (give it a read; I highly recommend it).

But what about the woman? In “The Dropout,” Rebecca Jarvis, chief business, economics, and technology correspondent for ABC News, makes the story more personal. She interviews the people who knew Holmes along the way, from her childhood until her trial, to better understand how she took her first step along that slippery slope of lies.

If you like this, you also might like: “WeCrashed,” by Wondery+, hosted and reported by David Brown, JD, PhD, who also hosts Wondery’s “Business Wars” and NPR’s “Marketplace.” Follow the rise and fall of WeWork, the once-unicorn that took to heart the adage, “The bigger they are, the harder they fall.” 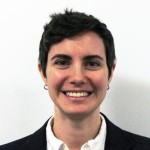 Alexa Hoffman is a Sr. Director of Product at Cision, focusing on making products customers love. She started her career as a newspaper reporter, then worked in editorial for PR and Marketing professionals. Outside of work, she enjoys photography, baking, hiking, and traveling with her wife.